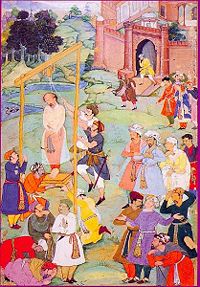 Among other Sufis, Al-Hallaj was an anomaly, many sufi masters felt that it was inappropriate to share mysticism with the masses, yet Al-Hallaj openly did so in his writings and through his teachings. He would begin to make enemies, and the rulers saw him as a threat. This was exacerbated by times when he would fall into trances which he attributed to being in the presence of God. During one of these trances, he would utter Ana al-Haqq, meaning "I am the Truth" and also, "In my turban is wrapped nothing but God?" which was taken to mean that he was claiming to be God, as Al-Haqq is one of the Ninety Nine Names of Allah. more...