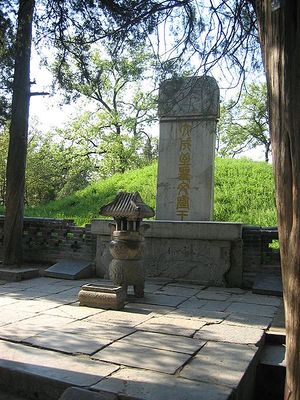 Photograph of the tomb of Confucius in Qufu, Shandong Province, China. Picture taken on April 21, 2005 by Rolf Müller. Confucius' posthumous name was "The Lord Propagator of Culture Ultimate Sage and Great Accomplisher" (大成至聖文宣王) which can be seen on the tomb.

Confucianism (儒家 Pinyin: rújiā "The School of the Scholars"), sometimes translated as the School of Literati, is an East Asian ethical, religious and philosophical system originally developed from the teachings of Confucius.

Debated during the Warring States Period and forbidden during the short-lived Qin Dynasty, Confucianism was chosen by Han Wudi and used as a political system and a kind of state religion. Despite loss of influence during the Tang Dynasty, Confucianist doctrine remained mainstream Chinese orthodoxy for two millennia, until the beginning of 20th century, when it was vigorously repressed by Chinese Communism. However, there are recent signs of a revival of Confucianism due to the loosening political control as well as a surge of Chinese nationalism.

Since Confucius' death, many people, mostly in China, Korea, Japan, and Vietnam, have professed Confucianist beliefs and seen in this historical figure the "Greatest Master."