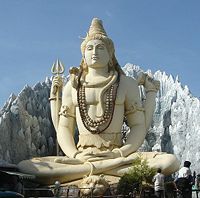 Shiva (also spelt Śiva, has many names) (Sanskrit:शिव) is form of God in Hinduism. He is the third form of God as God as the Destroyer, one of Trimurti (popularly called the "Hindu trinity"). In the trimurti, Shiva is the destroyer, while Brahma and Vishnu are creator and preserver, respectively. However, even though He represents destruction, He is viewed as a positive force (The Destroyer of Evil), since creation follows on from destruction. Some Hindus believe in a legend that he came from an egg laid by Ammavaru while others say he is anadi (without beginning/birth) and ananth (without end/death). Shivas worshippers are called Shaivaites.

Some of His chief attributes are signified by His hundreds of names, such as Mahabaleshwar (Great God of Strength), Tryambakam (Three-Eyed One, i.e. All-Knowing), Mahakala (Great Time, i.e. Conqueror of Time), Nilkanth (The one with a Blue Throat) etc. (more...)