David J, of Bauhaus and Love & Rockets, discusses his book Who Killed Mister Moonlight? – Bauhaus, Black Magick and Benediction. David also tells host Frater Puck about two new plays he has written, about Edie Sedgewick and the Black Dahlia, and plans for the future. Find out more at David’s website: Beginning with the creation of Bauhaus’s seminal debut hit ‘Bela Lugosi’s Dead’, David J. Haskins offers a no-holds-barred account of his band’s rapid rise to fame and glory in the late 70s, their sudden dissolution in the 80s, and their subsequent (and often strained) reunions.

In between, he explores his work as a solo performer, and with acclaimed trio Love And Rockets—culminating in the devastating fire that ripped through the sessions for their 1996 album Sweet F.A. He also delves deep into his exploration of the occult, drawing together a diverse cast of supporting characters, including William S. Burroughs, Alan Moore, Genesis P. Orridge, and Rick Rubin.

‘In a breathtaking ride along a flume of ink and sequins, David J. plots the delirious trajectory of a band who sparked the gothic movement’s second extraordinary emergence from among the cut-throat history and thousand-year-old churches of Northampton; who invented an epic fin de siècle mythology and then became it; who pushed their art and their performance far beyond the boundaries of what was safe or even survivable; and who ably demonstrated that pop music will send you mad even faster than magic.
Heroic and absurd, scurrilous and profound, Who Killed Mister Moonlight? charts the descent of four intelligent young men with faces like ruby-eyed dime-store skull rings into a glittering and very modern maelstrom. Fast, compelling, and disarmingly honest, this is an invaluable account of a strange and spectral cultural twilight era that we shall almost certainly never see again.
Highly recommended.’
Alan Moore 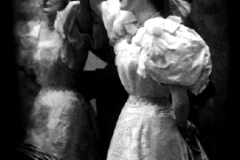