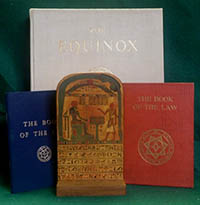 Another list from Weiser Antiquarian, this one focusing on The Book Of The Law, and it’s once again a treasure house of delights. Many remarkable items at reasonable prices…

Weiser Antiquarian Books Catalogue No. 103
Aleister Crowley and The Book of the Law

Weiser Antiquarian Books is pleased to announce the release of the one hundred-and-third of our on-line catalogues, this being another of our specialised Aleister Crowley lists, now on-line at:

This catalogue is focused on Crowley’s Liber AL vel Legis, The Book of the Law and begins with a stunning gathering of different editions of the work that have been assembled from several significant collections. Some of these editions are genuinely rare, having been produced in quite tiny print-runs. The variation in production values that they evidence is quite extraordinary, and they range from the rare first separate UK hardcover edition of 1938, printed on handmade paper and bound in buckram, to some truly awful cyclostyled or photocopied stapled booklets of the 1980s. Yet all were in their own way probably labours of love, and give silent commentary on the development and spread of Thelema. The sheer number of different editions gave us pause to consider the best order in which to list them. Ultimately we concluded that there was no “obvious” method and decided to make the listings roughly chronological, although where it seemed appropriate they are grouped around specific publishers (thus the various Xeno Press and Thelema Publications editions are kept together). Although far from complete, the collection is almost certainly the most comprehensive group ever to be offered at one time.

The books in this catalogue represent just a minute fraction of our overall holdings. We currently list nearly 10,000 other occult and related titles on our main website: