Weiser Antiquarian continues, with its latest catalog, to maintain an extraordinarily high standard. There are literally dozens of items in the latest one that I’d love to have in my archives!

Used and Rare Books and Ephemera

Weiser Antiquarian Books is pleased to announce the release of the one hundred and sixth of our on-line catalogues, this being another of our specialised Aleister Crowley lists. For those not interested in Crowley, do not be dismayed: we are working on another of our “Miscellany Lists” and several catalogues on other topics are slowly edging towards completion. We are also making a concerted effort to add fresh titles to our website on a weekly basis, so don’t forget to click the “new arrivals” link at the left side of our homepage regularly.

This catalogue is made up of seven sections, the first of which is a mixed collection of books and ephemera by Crowley himself.  It includes some truly stunning manuscript and typescript items, notably the original typescript of an unpublished film-script entitled “The Stolen Post-Office,” a murder mystery with a dissolute cocaine-fiend as the villain whose friend, “Snowbird Jim” starts out bad but ends up good under the influence of dance-hall-floozy come tart-with-a-heart “Dago Flo.” There is also a typescript of Crowley’s Liber Aleph that circulated amongst Crowley’s followers shortly before his death, and a small collection of documents relating to Crowley’s failed attempt to get to America during the Second World War, including an envelope on which Crowley has written “From my Gaoler.” Manuscript materials include an original manuscript poem that was later published in Konx om Pax, a note in which Crowley suggests a course by which the Thoth tarot deck might come to be his path-way to riches, two letters to Frieda Harris, and a remarkable note in which Crowley suggests Oscar Wilde to have been guilty of plagiarism!

Amongst the less common printed texts in this group are a copy of Crowley’s The Man That Put the O.K. in Book, a booklet that is as sycophantic as it is scarce, the softcover version of the 1992 Mandrake Press Ltd edition of the first eleven numbers of The Equinox (oddly the only edition that is a true facsimile of the first edition), and the memorable “Scratch ‘n’ Sniff” edition of Leah Sublime (1996), which was surely in part a homage to John Waters’ “Polyester” and its “Odorama.”

The second section comprises “Books and Journals Relating to Crowley, Thelema, and Associates,” and includes two unusual inscribed booklets by Crowley’s one-time disciple C. F. Russell, while the third section is devoted to the publications of Marcelo Motta and his “Society Ordo Templi Orientis.” The fourth section showcases one limited edition booklet, of which we have secured a few signed copies: a fascinating piece of literary detective work Bunbury. Two Notes on Oscar Wilde (Aleister Crowley and the Origin of “Bunbury” & A Source for the Importance of Being Earnest).

The fifth section of the catalogue is titled “Beardsley, the Beast, and his Bookplate,” for it brings together a small collection of books that in one way or other relate to the Aleister Crowley bookplate with design by Aubrey Beardsley. For many years the bookplate was almost legendary – there were various references to its existence, but no-one appeared to have ever actually seen a copy. It was a subject that fascinated Nicholas Bishop-Culpeper, who put together the small collection of books and journals in this section. Also included is a folder with a facsimile of the bookplate, and various ephemera relating to it that was assembled by Nicholas.

The penultimate section: “The Beast Observed: in Memoirs and Fiction,” comprises a disparate group of biographies, memoirs, etc., all of which contain at least some reference to Crowley. Of particular note are two copies of Betty May’s Tiger-Woman, the memoirs of the widow of Raoul Loveday, the former Oxford student who died whilst staying at Crowley’s Abbey of Thelema in Cefalu, which give an interesting first-hand account of life at the Abbey. Curiously Tiger Woman is referenced in another book in this section, Taylor Croft’s The Cloven Hoof: A Study of Contemporary London Vices (1932), a delightfully breathless romp through the seedy underbelly of London in the 1920s and early 1930s.

The catalogue ends with a collection of London Auction room catalogues from the 1950s through the 1970s. This was the period when many of important collections of Crowley’s works – often those of people who knew him – were dispersed at auction, and the catalogues sometime provide valuable bibliographical and biographical data. 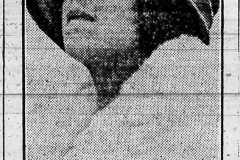