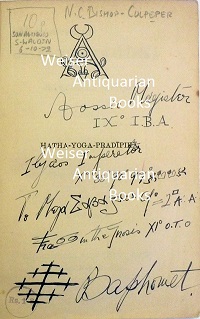 Weiser Antiquarian Books is pleased to announce the release of the one hundred-and-eighth of our on-line catalogues, this being another of our specialised Aleister Crowley lists, in this case released to mark the anniversary of the First Day of the writing of “The Book of the Law.”

The catalogue starts with a work that has provoked considerable discussion even before its public release: Michael Effertz’s thoughtfully argued Priest/ess: In Advocacy of Queer Gnostic Mass. There follows a section devoted to copies of The Book of the Law including a copy of the seldom-seen O.T.O. leather-bound Centennial Edition, limited to 418 numbered copies, signed by Hymenaeus Beta and the 1956 reissue of The Equinox of the Gods with the rare separate folder containing a facsimile of the original manuscript of “The Book of the Law.” Rare materials by Crowley in the following section include several letters from him to his collaborator on the Thoth tarot deck Frieda Harris, a superb first edition of The Book of Lies, a rare greeting-card type edition of The Hymn to Pan, and the original typescript of The Yi King: An Interpretation, a work which would later be published by Helen Parsons Smith as the Shi Yi.

Some of the most exciting items are found in the next section “Works by Friends and Followers of Aleister Crowley.” This includes Kenneth Grant’s copy of the Hatha-Yoga Pradipika of Svatmarama Svamin with his elaborate ownership inscription with his personal sigil and a list of the various titles to which he lay claim, on the half-title page (pictured), as well as editions deluxe of Beyond the Mauve Zone and The Magical Revival. There is also a good selection of works by Jack Parsons including his own copy of Robert Graves’ I, Claudius, with Jack Parsons’ ownership initials on the first blank. In addition to an unusual collection of publications by Louis T. Culling there is a nice group by Israel Regardie including a signed edition of The Eye in the Triangle.

The penultimate section “Works Relating to Aleister Crowley and his Magical Orders” includes a number of unusual books, some of which have a most interesting provenance. Thus a copy of L. Ron Hubbard, Final Blackout was a gift to Wilfred T. Smith and his wife, Helen (Helen Parsons Smith), a copy of De Villars’ Comte de Gabalis belonged to Reea Leffingwell (of Agape Lodge), whilst a copy of Christian D. Ginsburg’s The Kabbalah; Its Doctrines, Development and Literature has ownership signatures of two California Thelemites, Joseph C. Crombie and Mildred Burlingame. Copies of Arthur Edward Waite’s superb edition of Eliphas Levi’s The History of Magic and William Stirling’s The Canon are both from the collection of Aleister Crowley’s student Arthur Edward Richardson, with his bookplate on the front pastedown, whilst the first edition of Richard Kaczynski’s ground-breaking biography, Perdurabo. The Life of Aleister Crowley, is a presentation copy inscribed to English Crowley scholar Nicholas Bishop-Culpeper. The final section of the catalogue is somewhat more whimsical, featuring books related to music and cinema which make some mention of Aleister Crowley. Not surprisingly many also invoke the names of Jimmy Page and Kenneth Anger.

If the link does not work direct from your email, please cut and paste it into your web browser or try the link below: