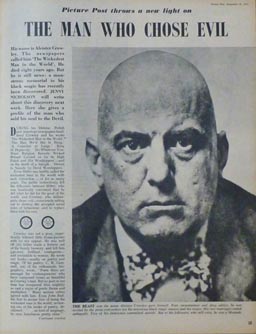 Another extraordinary list from Weiser Antiquarian. Not only is there a real treasure trove of Crowleyana here, but also a fascinating bibliographic read in its own right. Simply stunning!

Weiser Antiquarian Books is pleased to announce the release of the one hundred-and-tenth of our on-line catalogues. The catalogue begins with three interesting new releases: signed copies of Marlene Cornelius’ Liber AL Vel Legis: The Book of the Law. An Examination of Liber XXXI & Liber CCXX; and David Shoemaker’s Living Thelema: A Practical Guide to Attainment in Aleister Crowley’s System of Magick, and the always-interesting and beautifully produced AMeTh Lodge Journal. Vol. I, No. II from AMeTh Lodge of the O.T.O. in London. The next item is “Dark Halo,” a signed and numbered Limited Edition Print of a portrait of Aleister Crowley by California artist Heather McMillen, with an accompanying hand-written poetic “homage to Aleister Crowley” by Blair MacKenzie Blake, author of The Wickedest Books in the World and other works.

The third section of the catalogue is devoted to books and ephemera by Aleister Crowley himself. Amongst the rarities included are a copy of the Cambridge University magazine Granta which includes an anonymous poem by Crowley, a copy of the vellum bound first volume of The [Collected] Works of Aleister Crowley with an extraordinary double inscription, and Nicholas Bishop-Culpeper’s personal copy of Magick In Theory and Practice, beautifully bound in full vellum. There is also a group of four autograph letters, signed by Crowley; each is significant in its own way, with topics ranging from Crowley’s alleged share holdings in Australia, to a defense of Aubrey Beardsley! A selection of copies of The English Review, each with a contribution by Crowley, are followed by a varied group of books and journals that in one way or another relate to “the Beast.” Included amongst the journals are a copy of Esquire Magazine from March 1970 with a detailed and heavily illustrated series of essays on Californian occultism, that also reproduces a newsclipping concerning the famous “Solar Lodge” “Boy in the Box” debacle; a complete set of Sothis Magazine from the 1970s, a collection of the first seven issues of the Typhonian magazine Starfire; and 3 consecutive issues of Picture Post Magazine from 1955 which serialised a well-illustrated but breathless account of Crowley’s life. Amongst the books in the same section are a first edition of The Macedonians by Mary Butts, the English novelist and serious occult practitioner who spent some time at Cefalu with Crowley, the very uncommon first edition of Tiger-Woman by Betty May, in which she recounts her own time at Cefalu, and Nina Hamnett’s Laughing Torso, a book which eventually led Crowley into bankruptcy after he sued its publishers for libel, and failed.

A selection of the rather abstruse “Ming” booklets by one-time Crowley acolyte C F Russell is followed by the first three volumes of his also often-baffling Znuz is Znees, Memoirs of a Magician. A link, to a separate page, leads to listings for a collection of 26 books that were formerly in the library of Wilfred Talbot Smith (1885-1957), founder of “The Church of Thelema,” head of Agape Lodge of the O.T.O. in California, a long term associate of Aleister Crowley, and subject of Martin Starr’s biography The Unknown God. The collection includes a copy of the First US edition of Aleister Crowley’s Diary of a Drug Fiend, and copies of a number of works that Crowley is known to have recommended to his disciples, including The Canon; three books by Sydney T Klein; the James Legge, translations of The Tao Teh King and The Yi King; etc. Some of the books have presentation or other inscriptions by well known people within the Thelemic community, including C Stansfeld Jones; Frederic Mellinger; and Helen Parsons Smith. Most of the books are stamped with the personal lamen, with phallic design, of W T Smith, which he used as an ownership stamp, and a few also have his ownership signature. Included in the collection are several books that are quite scarce in their own right; notably the works by the obscure American alchemical author Delmar DeForest Bryant and the First Edition of the Pancham Sinh, translation of The Hatha Yoga Pradipika. Returning to the main page, the catalogue finishes with a group of copies of the Cincinnati Journal of Ceremonial Magick, a magazine published by a small Thelemic group in Ohio known as the Bate Cabal in the late 1970s and 80s.

If the link does not work, please cut and paste it into your web browser or try the link below: