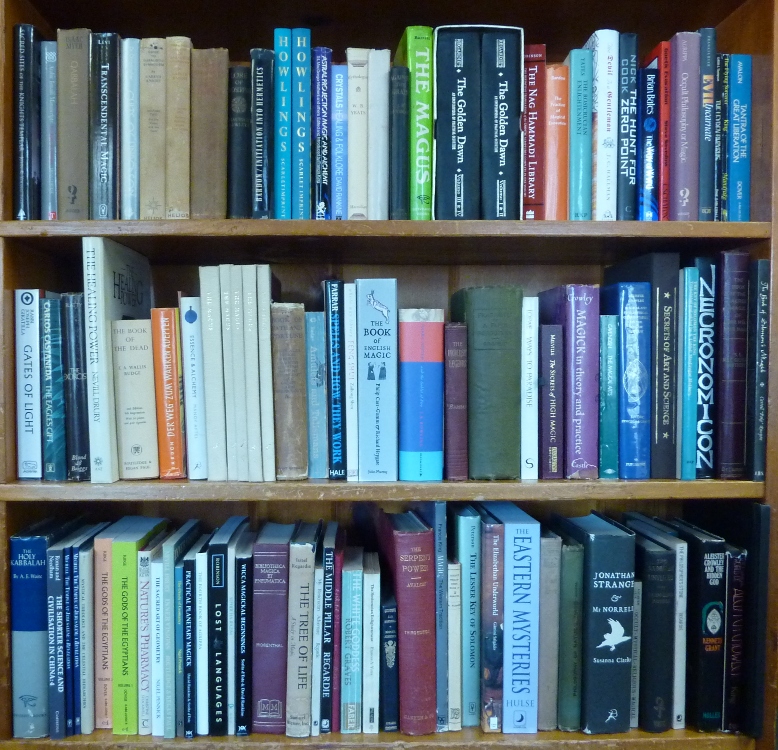 Mostly Magick: Surplus Books from the Library of Stephen Skinner

As the title suggests, the one hundred and sixty-seventh of our on-line catalogues comprises duplicates and other surplus books from the library of well-known occult scholar Stephen Skinner. To view the catalogue please go to the “on-line catalogue” section of our web-page where you will find the link to it at the top of the group of catalogue listings.

The subject matter is varied, from Alchemy to Wicca, with much in between, but the majority of the books revolve around the subject of Magick. Please note that many of the books were working copies and that while generally in solid, secondhand condition, they are sometimes far from pristine. That said, some of the copies are like new, and there are a few rarities, notably an inscribed presentation copy of Janet and Stewart Farrar’s Spells and How they Work, a nice copy of Aleister Crowley’s Magical and Philosophical Commentaries on the Book of the Law, and a lovely First Edition of the “Simon” Necronomicon, limited to 666 copies – this copy signed by the publisher L. K. Barnes, and by Stephen Skinner (who was the book’s UK distributor). There are also a handful of volumes of the “Rare Text Library of Philosophical Research” edition of Francis Barrett’s The Magus, a ground-breaking reissue (with some additional material) that was the first edition of the text to appear in the UK for over 90 years and introduced Barrett to a new generation of scholars and practitioners in the early 1960s.

Many, but not all, of the books in this catalogue have Stephen Skinner’s ownership signature.