The latest Catalogue from Weiser Antiquarian features works by and about Austin Osman Spare. It is, as usual, simply stunning…

The one-hundred and twenty-first of our on-line catalogues is devoted to books by and about the remarkable English artist and occultist Austin Osman Spare. To view this catalogue, simply click on this link:

Whilst preparing this catalogue we happened to look back through our files and discovered that it is just over eight years since we released the first of our catalogues devoted to Spare’s life and work, our On-line Catalogue # 4, which we released on May 15th, 2006, the fiftieth anniversary of the death of this extraordinarily talented individual. Although we did not realise it at the time, it was later pointed out to us that our catalogue was probably the first ever bookseller’s catalogue to be devoted entirely to works by and about Spare.

We are happy to continue this tradition with this new catalogue, which includes examples of most of Spare’s own published work along with many significant studies of his life, art and magic. As is well known Spare’s first editions were usually privately published in beautifully-produced limited edition printings, resplendent with his beguiling illustrations and profound and challenging text, and we are pleased to present two of them here; his magical masterwork The Book of Pleasure (Self-Love) The Psychology of Ecstasy (1913), and a signed first edition of his often-enigmatic A Book Of Satyrs (1907). Of course Spare was also well-known as the editor of two sumptuous literary and artistic journals published in the nineteen-teens and ‘twenties; Form and The Golden Hind, and the catalogue lists copies of both, including some truly rare issues of Form and some examples of the signed limited edition of The Golden Hind. Even more stunning, though, is a run of issues of a journal called The Bond (1906), which includes a previously unrecorded contribution by Austin Osman Spare. Other treasures include a set of Spare’s Surrealist Racing Forecast Cards (one of only 26 known sets), and a copy of one of the rarest early Spare-related titles, Warren Retlaw’s The Youth and the Sage (1927). Another magnificent volume is the posthumously-published A Book of Automatic Drawing, of which several variants are offered, including one of the Catalpa Press / Teitan Press reissues, limited to 40 copies, printed on hand-made paper and bound in black quarter-leather, with an original cheque signed by Spare tipped onto the limitation page. There are simply too many important works to comment upon in a short space like this, but I hope that the reader will find time to browse the catalogue at leisure. K.R. 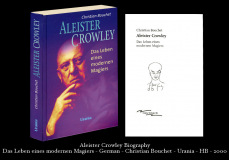