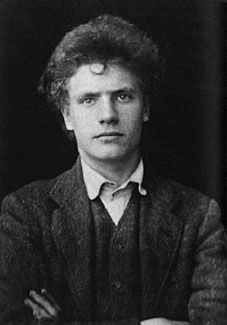 He was the son of a London policeman. As a child, he showed an affinity for art, and he briefly attended an art school. At the age of 13, he left school to become an apprentice to a stained glass maker. During his teen years, his fascination for the occult grew apace, heavily influencing the work he produced. In May 1904 EV, one of his drawings was exhibited at the annual Royal Academy exhibition in London, generating a storm of publicity for the young artist.

In October 1907 Spare exhibited his drawings at the Bruton gallery in London. His work resembled that of Aubrey Beardsley, but was full of grotesque, sexualized human figures and magical symbols. These elements appealed to avant-garde London intellectuals, and brought him to the attention of Aleister Crowley. Spare became a Probationer of Crowley's order A.'.A.'. in July 1909, but was not initiated as a member, although he contributed four small drawings to Crowley's publication The Equinox. Crowley later characterized Spare as a "Black Brother."

In 1917, during World War I, Spare was conscripted into the British army, serving as a medical orderly of the Royal Army Medical Corp in London hospitals. He did not see active service, and was commissioned as an official War Artist in 1919. He visited the battlefields of France to record the work of the R.A.M.C.

Although regarded as an artist of considerable talent and good prospects, Spare chose not to get involved into the London art scene, but lived a rather secluded life financed by pictures (portraits in particular) he sold for very small sums to friends and neighbors. Spare expressed contempt at the idea of selling his works at higher prices - an option he could easily have had. He worked very quickly and often finished drawings in minutes.

Spare's artistic and magical publications include Earth Inferno, The Book of Pleasure, The Focus of Life, manuscripts of Logomachy of Zos and Zoetic Grimoire of Zos which remained uncompleted at his death on May 15, 1956.

His iconoclasm and aversion to moralism as well as his sigilization served to distinguish his personal style of magic (the "Zos Kia Cultus") from others, and were influential on the Western esoteric tradition that later came to be known as chaos magic.