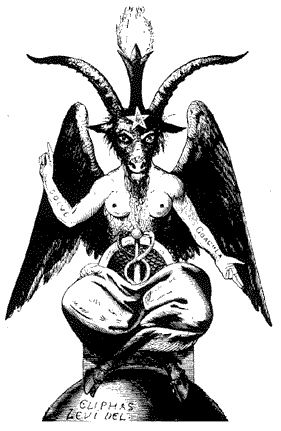 Baphomet and the Knights Templar

Baphomet first became known when the Knights Templar were tried for blasphemy, homosexuality, and devil worship by the Inquisition in the 13th century. According to confessions given by members, Baphomet was an idol that took the form of either a large head or a cat. Based on the various testimonies of the Templars, no precise description of Baphomet came to light. It is even possible that Baphomet never existed at all for the Knights, or that multiple idols might have been involved.

Baphomet gained new fame with the 19th century mystic Eliphas Lévi, who drew the now infamous image that is often taken for the modern Christian version of Satan. However, Lévi did not believe that Baphomet was in any way equal to this Devil, saying this icon "cannot be confounded with fabulous images of Satan." Further, he says "But the adorers of [Baphomet] do not consider...that it is a representation of the devil; on the contrary, for them it is that of the god Pan, the god of our modern schools of philosophy...the god of the primitive Gnostic schools" (Levi, 1995, p. 308).

According to Levi, Baphomet was symbolic of what he called the Great Magical Agent, which can be defined as the universal life-force. This Astral Light is also the force that adepts use in magical operations. Common analogies are the Hindu Kundalini and the First Matter of alchemy.

In Transcendal Magic, Lévi explains the symbolism of his famous drawing:

"Moreover, the sign of occultism is made with both hands, pointing upward to the white moon of Chesed, and downward to the black moon of Geburah. This sign expresses the perfect concord between mercy and justice. One of the arms is feminine and other masculine, as in the Androgyne of Khunrath, whose attributes we have combined with those of our goat, since they are one and the same symbol. The torch of intelligence burning between the horns is the magical light of universal equilibrium; it is also the type of soul exalted above matter, as the flame cleaves to the torch. The monstrous head of the animal expresses horror of sin, for which the mateial agent, alone responsible, must alone and for ever bear the penalty, because the soul is impassible in its nature and can suffer only by materialising. The caduceus, which replaces the generative organ, represents eternal life; the scale-covered belly tyifies water; the circle above it is the atmosphere; the feathers still higher up signify the volatile; lastly, humanity is depicted by the two breasts and the androgyne arms of this sphinx of the occult sciences" (Levi, 1995, p. 309).

Baphomet is listed within the Gnostic Creed of the Ecclesia Gnostica Catholica (the eccesiastical arm of Ordo Templi Orientis). The relevant article of the Creed is as follows: "And I believe in the Serpent and the Lion, Mystery of Mystery, in His name Baphomet."

Crowley said that Baphomet was representative of the Babe in the Egg, or the original being, which was bisexual, and symbolized "arcane perfection" (Crowley 1997). He further says of Baphomet, "this Goat is called also Strength, and standeth at the Meridian at the Sunrise of Spring, and it is his Nature to leap upon the Mountains. So therefore is he a symbol of true Magick" (Crowley 1995).

In The Book of Lies (1913), the 33rd chapter is entitled "Baphomet." It puports to transmit Templar Grand Master Jacques DeMolay's description of God under the figure of the double-headed eagle used as a symbol of Scottish Rite Freemasonry. It also alludes to "the GOD that is ass-headed," leaving it unclear whether Baphomet is to be identified with either, neither, or both the eagle and the ass-headed figures.

In the Book of Thoth (1981), Crowley identifies Baphomet with the Tarot card "The Devil" and attributes him to the Greek god Pan, the All-Begetter. In this context, Baphomet represents the "creative energy in its most material form...the divine madness of Spring" where he is exalted in the manifested, material world — a supreme appreciator of existence and the power of creation.

The name Baphomet was taken by Aleister Crowley when he became the Outer Head of the Order (or OHO) for OTO.

Origins of the Name

Many theories exist as to the origin of the term, including: