Boleskine House (boll-ESS-kin) was the estate of Aleister Crowley from 1899 to 1913. It is located on the South-Eastern shore of Loch Ness in Scotland. It was built in the late 18th century by Archibald Fraser. 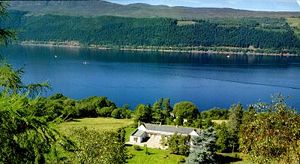 One must have a house where proper precautions against disturbance can be taken; this being arranged, there is really nothing to do but to aspire with increasing fervor and concentration, for six months, towards the obtaining of the Knowledge and Conversation of the Holy Guardian Angel.

The first essential is a house in a more or less secluded situation. There should be a door opening to the north from the room of which you make your oratory. Outside this door, you construct a terrace covered with fine river sand. This ends in a "lodge" where the spirits may congregate.

Crowley eventually sold the manor in order to fund the publication of The Equinox, Vol. III. However, he later alleged that the funds were stolen by the Grand Treasurer General of the Order, George MacNie Cowie. (The extensive mortgaging of the house by that time may in fact have left little funds to steal.)

For a short time in the 1970s, Boleskine was owned by famed Led Zeppelin guitarist, Jimmy Page.

The Kiblah of Thelema

Aleister Crowley considered Boleskine to be the Thelemic Kiblah, the holiest of shrines. It is is mentioned by name in several rituals written by Crowley, and is identified with the East. It is considered to be the focal point of the magical energies (also called the 93 Current) of the Aeon of Horus, similar to Jerusalem of Christianity and Mecca of Islam.

Specifically the Gnostic Mass (described in Liber XV) and the Ritual of the Mark of the Beast (in Liber V) both identify the principal orientation (sometimes known as "Magical East") as being towards Boleskine.

Thus, the location of Boleskine House is to be the Omphalos or Center of Power for Thelema, and is to continue as such for the duration of the Aeon of Horus, regardless of the physical presence of the Stèle or of the house itself. Thus, O.T.O. Lodges, Profess-Houses and Gnostic Mass Temples are ideally to be oriented towards Boleskine.

Boleskin House is located on the South-Eastern shore of Loch Ness in Scotland at latitude 57.14 N., longitude 4.28 W.

The house is a long low building. I set apart the south-western half for my work. The largest room has a bow window and here I made my door and constructed the terrace and lodge. In side the room I set up my oratory proper. This was a wooden structure, lined in part with the big mirrors which I brought from London.

The home includes the entrance hall, 5 bedrooms, 3 bathrooms, a drawing room, dining room, family room, kitchen, utility room, and the cellars. The grounds (about 47 acres) includes the Gate Lodge, which was originally the home for a coachman. It has a living room, kitchen, bedroom, and bathroom, as well as a pond, small garden and an orchard.

This from the sales brochure when it was sold by Jimmy Page:

SITUATION Boleskine House occupies a spectacular position overlooking Loch Ness and yet is only 18 miles from the centre of Inverness from where the mainline British Rail service links to the rest of the UK. Dalcross Airport is about 10 miles further East via the A96 (T) Nairn road.

Excellent salmon fishing can be rented on Loch Ness and evidence of this can be seen in the Foyers Hotel who keep a pictorial record of all fish caught over 15 lbs. The owners of Boleskine House have the right to fish for trout on Loch Ness from the bank and there are numerous hill lochs and several rivers nearby which provide excellent sport.

Loch Ness, being part of the Caldonian Waterway, is a very popular boating area and Boleskine House has a Boathouse on the edge of the Loch allowing the owners to keep a boat.

DESCRIPTION Boleskine House enjoys one of the best situations in the Highlands with unrivalled views over, and frontage to, Loch Ness. The property benefits from beautiful mature gardens and grounds extending in all to about 47.5 acres.

Boleskine House and gardens are further enhanced by the natural backdrop of a steep hillside dominated by a mass of rhododendrons, mature Larch, Birch, Scots Pine, Noble and Douglas Fir trees.

RIGHTS OF ACCESS A tarmacadam track passes through the land below the B852 minor County Road as marked A-B on the enclosed plan. The owner of Boleskine House has a vehicular right of access over this track in order to reach the land running down to Loch Ness.

ENVIRONMENTAL STIPULATIONS Boleskine House, the Gate Lodge and Coach-house are listed Category 'B' as buildings of architectural or historic interest. NOTE: There is an informal agreement between the owners of Boleskine House and the Local Authority allowing the free use of the hardcore area above the burial ground as car parking on the rare occasions when a burial is taking place in the Boleskine Burial Yard.

HISTORY Boleskine House was built in the late Eighteenth Century on land acquired from the Church by the Honourable Archibald Fraser, a relative of Lieutenant General Simon Fraser, Lord Lovat at the time. The Honourable Archibald Fraser reputedly chose this site for a house in order to irritate Lord Lovat, whose lands surrounded the property, in retribution for Lord Lovat's support of the English during the Jacobite Rebellion of 1745.

The associations with the Fraser family can also be seen in the Boleskine Burial Ground situated below the B852. Recognised as a site of historic interest the burial ground holds several of the family graves and is notable for the remains of the original Chapel and Grave Watcher's Hut. The Grave Watcher was employed to prevent body snatchers from defiling the graves.

Boleskine House remained in Fraser family ownership until the late Nineteenth or early Twentieth Century. Since then there have been several owners.

ENTRANCE HALL. With a pair of display alcoves and two walk-in cupboards, one of which is fitted with coat hooks. The roof above this section of the house has been completely rebuilt by the present owners using steel beams to replace the old roof timbers. Doors lead off to:

DINING ROOM (W). 26' 6" x 18' 1". French window to garden, bay window with views over Loch Ness to the South, West and North, shelved recess, and recess with built in drawers.

OUTSIDE A second cellar, housing the oil tanks and a "Potterton" oil fired boiler is reached via a door on the North gable of Boleskine House.

THE GARDENS Boleskine House is sheltered from the North by a screen of mature Douglas Fir and Cyprus trees and several handsome Cedar trees. In front of the House are well maintained terraced lawns with flowering borders and shrubs running down to a curved Ha-Ha.

To the rear of Boleskine House is a gravelled turning and parking area with a central roundabout containing several Eucalyptus trees. Stone steps lead up to a lovely sheltered garden principally laid to lawns but with several flowering borders and shrubs as well as specimen trees and box hedging. At the top of the garden there is a large pond (measuring approximately 100' x 40') which is reputedly a rare breeding habitat for the Great Crested Newt. From the pond a small burn runs down through the garden. Also in the garden is a timber built workshop/garden store with power laid to it and a green house with power and water laid to it containing a productive Black Hamburg vine. Below the greenhouse is a small duck pond.

The steep slopes of Taman Tarsuinn Hill run down to the pond and provide a dramatic backdrop to Boleskine House and gardens. The hillside is covered in a mass of rhododendrons providing a spectacular show of colour inthe Spring and many mature Larch, Birch, Scots Pine, Douglas and Noble Firs add to the landscape.

Next to the garden is an extensive soft fruit garden and an orchard. The soft fruit garden contains Raspberries, Logan Berries, Blueberries, Redcurrants, Blackcurrants, White Currants, and Apple and Pear trees. This is complemented by the orchard containing Apple, Pear and Plum trees as well as a single Cherry tree.

THE GATE LODGE The Category 'B' listed Gate Lodge lies at the entrance of the tarmadacam drive to Boleskine House and is a most attractive small property with lovely views over Loch Ness. The Lodge is constructed of stone under a slate roof and the accomodation briefly comprise: Large covered porch to substantial double storm doors opening into the Entrance Hall containing the meter cupboard and fuse box, access to the attic housing the cold water tank and doors off to:

OUTSIDE In front of the Gate Lodge is a small rockery garden planted with numerous flowering and evergreen shrubs. To the South of the Lodge is a garden area planted with daffodils and flowering Cherry Trees. Behind the Lodge and next to the burn are two productive gooseberry bushes.

OUTBUILDINGS About 200 yards to the north east of Boleskine House, approached over a hardcore track, is a Category 'B' listed stone built former Coach House. This is a substantial building and benefits from both mains and private water and mains electricity. If the necessary Planning Consent was obtained, this building could be converted into an attractive Cottage with superb views over Loch Ness.

Below the Coach House is a substantial former piggery.

At the edge of Loch Ness, on the Western boundary of the property, is a timber built BOATHOUSE capable of taking a 16' boat.

THE LAND The land lies mainly to the south and west of Boleskine House, although the House occupies a reasonably central position on the property. The land is mainly pasture but the hill ground behind the House and garden, and the land running down to Loch Ness below the access road to the west of the graveyard are wooded.

Below the Coach House is a most useful pony paddock extending to about 2 acres. This paddock is partly railed and partly fenced with stock proof fencing. A second paddock lies to the south of the House and extends to about 3 acres.

Beyond a burn a further paddock extends to about 10 acres and has the benefit of separate access off the B852. Below the country road, there are 2 further paddocks extending to about 3 acres in total.