Book of the Dead

There is also a Tibetan Book of the Dead, the Bardo Thödol. 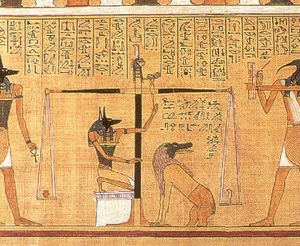 Anubis weighing the heart of Hunefer. This detail scene, from the Papyrus of Hunefer (ca. 1375 B.C.), shows Hunefer's heart being weighed on the scale of Maat against the feather of truth

The Book of the Dead is the common name for the ancient Egyptian funerary text The Book of Coming [or Going] Forth By Day. The name was invented by the German Egyptologist Richard Lepsius, who published a selection of the texts in 1842.

The name is somewhat misleading, as the "book" was nothing like a modern book. The text was initially carved on the exterior of the dead person's sarcophagus, but was later written on papyrus and buried inside the mummy case with the deceased, presumably so that it would be both portable and close to hand.

It constituted a collection of spells, charms and magical formulas for use by the deceased in the afterlife, describing many of the basic tenets of Egyptian mythology. They were intended to guide the dead through the various trials that they would encounter before reaching the underworld. Knowledge of the appropriate spells was considered essential to achieving happiness after death.

The Book of the Dead was usually illustrated with pictures showing the tests to which the deceased would be subjected, of which the most important was the weighing of the heart of the dead person against Truth. The god Thoth would record the results and a monster would wait in the wings to eat the dishonest heart.

The earliest known version dates from the 16th century BC during the 18th Dynasty (circa 1580-1350 BC). It partly incorporated two previous collections of Egyptian religious literature, known as the Coffin Texts (c. 2000 BC) and the Pyramid Texts (c. 2600-2300 BC), both of which were eventually superseded by the Book of the Dead.