Gaia ("land" or "earth", also spelled Ge or Gaea) is a Greek goddess personifying the Earth.

Hesiod's Theogony (116ff) tells how, after Chaos, arose broad-breasted Gaia the everlasting foundation of the gods of Olympus. She brought forth Ouranos, the starry sky, her equal, to cover her, the hills, and the fruitless deep of the Sea, Pontus, "without sweet union of love," out of her own self. But afterwards, Hesiod tells, she lay with Heaven and bore the World-Ocean Oceanus, Coeus and Crius and the Titans Hyperion and Iapetus, Theia and Rhea, Themis and Mnemosyne and Phoebe of the golden crown and lovely Tethys. "After them was born Cronos the wily, youngest and most terrible of her children, and he hated his lusty sire." 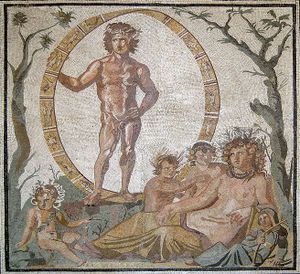 Aion and Gaia with four children, perhaps the personified seasons, mosaic from a Roman villa in Sentinum, first half of the 3rd century BC, (Munich Glyptothek, Inv. W504)

Hesiod mentions Gaia's further offspring conceived with Uranus, first the giant one-eyed Cyclopes, builders of walls, later assigned individual names: Brontes ("thunderer"), Steropes ("lightning") and the "bright" Arges: "Strength and might and craft were in their works." Then he adds the three terrible hundred-handed sons of Earth and Heaven, the Hecatonchires: Cottus and Briareos and Gyges, each with fifty heads.

Uranus hid the Hecatonchires and the Cyclopes in Tartarus so that they would not see the light, rejoicing in this evil doing. This caused pain to Gaia (Tartarus was her bowels) so she created grey flint (or adamantine) and shaped a great flint sickle, gathering together Cronus and his brothers to ask them to obey her. Only Cronos, the youngest, had the daring to take the flint sickle she made, and castrate his father as he approached Gaia to have sex with her. And from the drops of blood and semen, Gaia brought forth still more progeny, the strong Erinyes and the armoured Giants and the ash-tree Nymphs called the Meliae. From the testicles of Uranus in the sea came forth Aphrodite. For this, a Greek etymologist urged, Uranus called his sons "Titans," meaning "strainers" for they strained and did presumptuously a fearful deed, for which vengeance would come afterwards; for, as Uranus had been deposed by his son Cronus, so was Cronus destined to be overthrown by Zeus his son that Rhea his sister-wife bore him. In the meantime, the Titans released the Cyclopes from Tartarus, and Cronus was awarded the kingship among them, in a Golden Age

Zeus hid Elara, one of his lovers, from Hera by hiding her under the earth. His son by Elara, the giant Tityas, is therefore sometimes said to be a son of Gaia, the earth goddess, and Elara.

Gaia is believed by some sources (Joseph Fontenrose 1959 and others) to be the original deity behind the Oracle at Delphi. She passed her powers on to, depending on the source, Poseidon, Apollo or Themis. Apollo is the best-known as the oracle power behind Delphi, long established by the time of Homer, having killed Gaia's child Python there and usurped the chthonic power. Hera punished Apollo for this by sending him to King Admetus as a shepherd for nine years.

Unlike Zeus, a roving nomad god of the open sky, Gaia was manifest in enclosed spaces: the house, the courtyard, the womb, the cave. Her sacred animals are the serpent, the lunar bull, the pig, and bees. In her hand the narcotic poppy may be transmuted to a pomegranate.