Jacques de Molay (1243-1314 e.v.)) served as the 23rd, and officially last, Grand Master of the Knights Templar, and is probably the best known templar besides the order's founder and first Grand Master, Hughes de Payens. He is one of the Gnostic Saints. 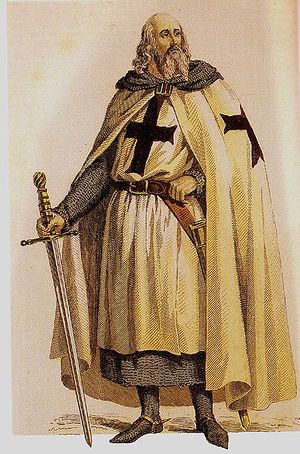 De Molay's exact date of birth is in some doubt, but it is known that he joined the Knights Templar in 1265 at the age of 21 and rose through the ranks quickly. He was first appointed to the position of Visitor General in Britain, and later elevated to the post of Grand Preceptor of England.

After the death of Theobald Gaudin, the 22nd Grand Master, de Molay moved from England to Cyprus, where he remained until Pope Clement V summoned him to France in 1307. There he was arrested and jailed by Philip the Fair.

De Molay confessed under torture to "denying Christ and trampling on the Cross," and on March 18, 1314 he was led out to publicly confess the order's sins and his own. On this occasion he recanted his previous confessions and asserted that he was guilty only of lying about his sins in order to relieve his torture. He was taken to Ile de la Cité in the Seine and burned alive, along with Geoffrey de Charney, the preceptor of Normandy.

It is said that Jacques de Molay cursed Philip the Fair and his descent from his execution pyre. And, indeed, the rapid succession of the last direct Capetian kings of France between 1314 and 1328, the three sons of Philip IV the Fair, let many to believe that the dynasty had been cursed – thus the name of "cursed Kings" (rois maudits).