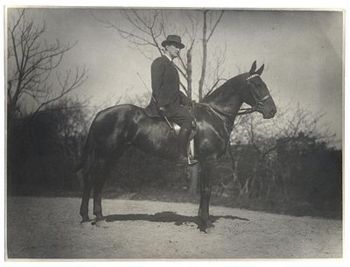 John Quinn (1870-1924) was a second generation Irish-American corporate lawyer in New York, who for a time was an important patron of major figures of post-impressionism and literary modernism, and collector in particular of original manuscripts.

He was an organizer and spokesperson for the 1913 Armory Show, and later legal defender of James Joyce and T. S. Eliot. He was a friend of Ezra Pound.

He was a supporter of the Irish nationalist cause and associated with figures such as John Devoy and Roger Casement, though he worked for British Intelligence services before, during and after World War One. In this role he acted as case officer for, among others, Aleister Crowley who was an agent provocateur posing as an Irish nationalist in order to infiltrate anti-British groups of Irish and Germans in the United States.

In 1913, he convinced the United States Congress to overturn the 1909 Tariff Law, which retained the duty on foreign works of art less than twenty years old and which discouraged collecting modern European art.

A huge and controversial event, the 1913 Armory Show (officially The International Exhibition of Modern Art, in New York City) included examples of Symbolism, Impressionism, Post-Impressionism, Neo-Impressionism, and Cubism. John Quinn opened the exhibition with the words:

"... it was time the American people had an opportunity to see and judge for themselves concerning the work of the Europeans who are creating a new art."

Quinn was born in Tiffin, Ohio, to an Irish baker and grocer, James W. Quinn, and Mary Quinlaw Quinn, and grew up in nearby Fostoria, Ohio, where his parents relocated in 1871. His paternal grandparents, James and Mary (Madigan) Quinn, natives of County Limerick, Ireland, settled in Tiffin in 1851, where the grandfather was a blacksmith by trade.

Quinn died at age 54 and was buried by his family in Fostoria, Ohio.