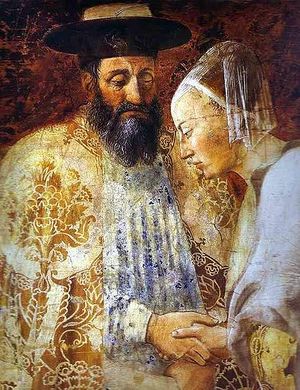 Solomon or Shlomo (Hebrew: שְׁלֹמֹה; Standard Hebrew: Šəlomo; Tiberian Hebrew: Šəlōmōh, meaning "peace"; Arabic: سليمان Sulayman) in the Tanakh (Old Testament), also called Jedidiah, was the third and last King of united Israel (including Judah), builder of the Temple in Jerusalem, renowned for his great wisdom and wealth and power, but also blamed for his later pacifism toward his converted wives in their worship of other gods. He is the subject of many later legends. He is also in a line of the biggest Kabbalah masters.

The name Solomon (Shlomo) means "peaceful," from the Hebrew Shelomoh (Arabic Sulayman). The name given by God to Solomon in the Bible is Jedidiah, meaning "loved by God", (2 Samuel 12:25), and some scholars have conjectured that Solomon is a "king name" taken either when he assumed the throne or upon his death.

Solomon's case is one of the few in the Bible where the name given by God does not stay with the character. Solomon's birth is considered a grace from God, after the death of the previous child between David and Bathsheba.

Solomon is David's second son by Bathsheba. In the Bible, the prophet Nathan informs David that God has willed that his firstborn son must die, as punishment for David's method of execution of Uriah the Hittite, and his relationship with Bathsheba, Uriah's wife, which was similar in nature to adultery. After praying and fasting for a week, David heard the news that his son had died, and comforted the grieving Bathsheba, who became pregnant with Solomon.

Solomon's history is recorded in 1 Kings 1–11 and Chronicles 1–9. He succeeded his father (reigned circa 1000-960 AEV) on the throne in about 960 AEV, not 1037 AEV (1 Kings 6:1). His father chose him as his successor, passing over the claims of his elder sons, by women other than Bathsheba. His elevation to the throne took place before his father's death, and is hastened on mainly by Nathan and Bathsheba, in consequence of the rebellion of Adonijah.

During his long reign of 40 years the Hebrew monarchy gained its highest splendour. This period has well been called the "Augustan age" of the Jewish annals. In a single year he collected tribute amounting to 666 talents of gold, according to 1 Kings 10:13.

The first half of his reign was, however, by far the brighter and more prosperous; the latter half was clouded by the idolatries into which he fell, mainly, according to the scribes, from his intermarriages. According to 1 Kings 11:3, he had 700 wives and 300 concubines. As soon as he had settled himself in his kingdom, and arranged the affairs of his extensive empire, he entered into an alliance with Egypt by a marriage with the daughter of the Pharaoh.

Buildings and other works

He surrounded himself with all the luxuries and the external grandeur of an Eastern monarch, and his government prospered. He entered into an alliance with Hiram I, king of Tyre, who in many ways greatly assisted him in his numerous undertakings. For some years before his death David was engaged in the active work of collecting materials for building a temple in Jerusalem as a permanent abode for the Ark of the Covenant.

After the completion of the temple, Solomon erected many other buildings of importance in Jerusalem and in other parts of his kingdom. For the long space of thirteen years he was engaged in the erection of a royal palace on Ophel. Solomon also constructed great works for the purpose of securing a plentiful supply of water for the city, Millo (Septuagint, Acra) for the defense of the city, and Tadmor in the wilderness as a commercial depot as well as a military outpost.

During his reign Israel enjoyed great commercial prosperity. Extensive traffic was carried on by land with Tyre and Egypt and Arabia, and by sea with Tarshish (Spain), Ophir and South India and the coasts of Africa. The royal magnificence and splendour of Solomon's court are unrivaled. Solomon was known for his wisdom and proverbs. People came from far and near "to hear the wisdom of Solomon", including queen Makedah or Balkis of Sheba, (identified with a country in Arabia Felix). Their son Menelik I, according to Ethiopian tradition, would become the first emperor of Ethiopia. His thoughts are enshrined in storytelling, though probably, not all the clever thinking in the stories originates with the one man.

Blamed for his decline and fall from his high estate were his polygamy and his great wealth, causing him to become decadent and involved in various forms of idol worship which are contrary to the religious law. Because of this idol worship, a prophet visits Solomon and tells him that after his death his kingdom would be split in two (Israel and Judah) and that his son, Rehoboam, would suffer because of his sin. He died, after a reign of forty years, and was buried in Jerusalem.

Solomon in the Qur'an

Solomon also appears in the Qur'an, where he is called Sulayman. The Qur'an refers to Solomon as the son of David, as a prophet and as a great ruler imparted by God with tremendous wisdom, favor, and mystical powers. Solomon was said to have under his rule not only people, but also hosts of invisible beings (i.e., jinn). And like his father David, Solomon is said to have been able to understand the language of the birds, and to see some of the hidden glory in the world that was not accessible to common human beings.

Surah 27:15 “And, indeed, We granted [true] knowledge unto David and Solomon [as well]; and both were won't to say: 'All praise is due to God, who has [thus] favored us above many of His believing servants!' And [in this insight] Solomon was [truly] David's heir; and he would say: 'O you people! We have been taught the speech of the birds, and have been given [in abundance] of all [good] things: this, behold, is indeed a manifest favor [from God]!'”

Surah 34:12 "And unto Solomon [We made subservient] the wind: its morning course [covered the distance of] a month’s journey, and it’s evening course, a month's journey. And we caused a mountain of molten copper to flow at his behest; and [even] among the invisible beings there were some that had [been constrained] to labour for him by his Sustainer's leave – and whichever of them deviated from Our command, him would We let taste suffering through a blazing flame –: they made for him whatever he wished of sanctuaries, and statues, and basins as [large as] great watering-troughs, and cauldrons firmly anchored."

"The kingdom of Solomon," says George Rawlinson, "is one of the most striking facts in Biblical history. A petty nation, which for hundreds of years has with difficulty maintained a separate existence in the midst of warlike tribes, each of which has in turn exercised dominion over it and oppressed it, is suddenly raised by the genius of a soldier-monarch to glory and greatness."

Rawlinson continues, "an empire is established which extends from the Euphrates to the borders of Egypt, a distance of 450 miles; and this empire, rapidly constructed, enters almost immediately on a period of peace which lasts for half a century. Wealth, grandeur, architectural magnificence, artistic excellence, commercial enterprise, a position of dignity among the great nations of the earth, are enjoyed during this space, at the end of which there is a sudden collapse."

Rawlinson concludes, "the ruling nation is split in twain, the subject-races fall off, the pre-eminence lately gained being wholly lost, the scene of struggle, strife, oppression, recovery, inglorious submission, and desperate effort, re-commences."

To Solomon are attributed by rabbinical tradition but not internally, the Biblical books of Book of Proverbs, Ecclesiastes and the Song of Solomon. Then comes the Wisdom of Solomon, probably written in the 2nd century AEV where Solomon is portrayed as an astronomer. Other books of wisdom poetry attributed to Solomon are the Odes of Solomon and the Psalms of Solomon.

The Jewish historian Eupolemus, who wrote about 157 AEV, included copies of apocryphal letters exchanged between Solomon and the kings of Egypt and Tyre.

The Gnostic Apocalypse of Adam, which may date to the 1st or 2nd century EV, refers to a legend in which Solomon sends out an army of demons to seek a virgin who had fled from him, perhaps the earliest surviving mention of the later common tale that Solomon controlled demons and made them his slaves. This tradition of Solomon's control over demons appears fully elaborated in the early Christian work called the Testament of Solomon with its elaborate and grotesque demonology.

Solomon's mastery of demons is a common element in later Jewish and Arab legends, and is often attributed to possession of a magic ring called the "Seal of Solomon".

The ancient Imperial legend of Ethiopia, as told in the Kebra Nagast maintains that the Queen of Sheba returned to her realm from her Biblical visit to Solomon, pregnant with his child. This child would eventually inherit her throne with the new rank and title of Menelik I, Emperor of Ethiopia. The dynasty he would establish would reign in Ethiopia with few interruptions until the overthrow of Emperor Haile Selassie in 1974 EV.

The Table of Solomon was said to be held in Toledo, Spain during the the Visigothic rule and was part of the loot taken by Tarik ibn Ziyad during the Islamic conquest of Spain, according to Ibn Abd-el-Hakem's History of the Conquest of Spain.