From Encyclopedia Thelemica
(Redirected from Oroboros)
Jump to navigationJump to search 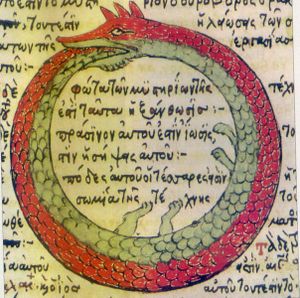 The Ouroboros (Alternately: Oroborus, Uroboros, Uroborus) is an ancient symbol depicting a snake or dragon swallowing its tail, constantly creating itself and forming a circle. It is associated with alchemy, Gnosticism, and Hermeticism. It represents the cyclical nature of things, eternal return, and other things perceived as cycles that begin anew as soon as they end. In some representations the serpent is shown as half light and half dark, echoing symbols such as the Yin Yang, which illustrates the dual nature of all things, but more importantly, that these opposites are not in conflict. The ouroboros is an example of tail recursion and self-reference, though not in a programming context.

In alchemy, the ouroboros symbolises the circular nature of the alchemist's opus which unites the opposites: the conscious and unconscious mind.

It is believed to have been inspired by the Milky Way, as some ancient texts refer to a serpent of light residing in the heavens.

The name ouroboros (or, in Latinized form, uroborus) is Greek and means "tail-devourer". The serpent or dragon eating its own tail has survived from antiquity and can be traced back to Ancient Egypt, circa 1600 B.C.E. From there it passed to Phoenicia and then to the Greek philosophers, who gave it the name Ouroboros ("the tail-devourer").

In Norse mythology it appears as the serpent Jormungand, one of the 3 children of Loki, who grew so large that it could encircle the world and grasp its tail in its teeth. It is also present in Hindu mythology, as the dragon circling the tortoise which supports the four elephants that carry the world. The serpent or dragon also appears in Aztec, Chinese, and Native American mythology.

Christians adopted the Ouroboros as a symbol of the limited confines of this world (that there is an "outside" being implied by the demarcation of an inside), and the self-consuming transitory nature of a mere this-worldly existence (following in the footsteps of the Preacher in Ecclesiastes).

It could very well be used to symbolize the closed-system model of the universe of some physicists even today.

In alchemy, the ouroboros is a purifying sigil. As a symbol of the eternal unity of all things, the cycle of birth and death from which the alchemist sought release and liberation, it was familiar to the alchemist/physician Sir Thomas Browne. In his A letter to a friend, a medical treatise full of case-histories and witty speculations upon the human condition, he wrote of it:

"[...] that the first day should make the last, that the Tail of the Snake should return into its Mouth precisely at that time, and they should wind up upon the day of their Nativity, is indeed a remarkable Coincidence,"

It is also alluded to at the conclusion of Browne's The Garden of Cyrus (1658) as a symbol of the Circular nature and Unity of the two Discourses.

"All things began in order so shall they end, so shall they begin again according to the Ordainer of Order and the mystical mathematicks of the City of Heaven".

Swiss psychologist Carl Jung saw the ourobouros as an archetype and the basic mandala of alchemy.

Jung also defined the relationship of the ouroboros to alchemy:

"The alchemists, who in their own way knew more about the nature of the individuation process than we moderns do, expressed this paradox through the symbol of the uroboros, the snake that eats its own tail. In the age-old image of the uroboros lies the thought of devouring oneself and turning oneself into a circulatory process, for it was clear to the more astute alchemists that the prima materia of the art was man himself. The uroboros is a dramatic symbol for the integration and assimilation of the opposite, i.e. of the shadow. This 'feed-back' process is at the same time a symbol of immortality, since it is said of the uroboros that he slays himself and brings himself to life, fertilises himself and gives birth to himself. He symbolises the One, who proceeds from the clash of opposites, and he therefore constitutes the secret of the prima materia which [...] unquestionably stems from man's unconscious'. (Collected Works, Vol. 14 para.513)