Pan (Greek Παν, genitive Πανος) is the Greek god who watches over shepherds and their flocks. He has the hindquarters, legs, and horns of a goat, in the same manner as a satyr, and is one of the deities within the archetype of the Horned God. His parentage is unclear; in some legends he is the son of Zeus and in some he is the son of Hermes. His mother is said to be a nymph. His nature and name (Pan means "All") is alluring, in many ways he seems to be identical to Protogonus/Phanes. 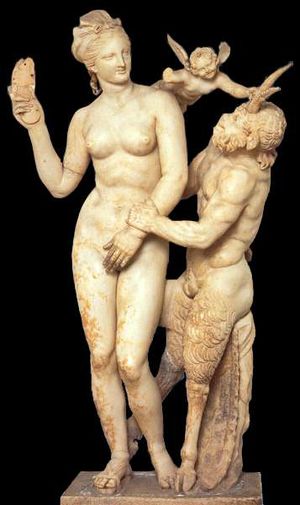 (Aphrodite, Eros and Pan, c. 100 BC, Delos, Marble c. 130 cm, National Museum Athens, Greece, Inv.3335. Inscription: “Dionysios, son of Zeno, son of Theodoros of Berytus, benefactor, [dedicates this] on behalf of himself and of his children to the ancest)

The Homeric hymn to Pan describes him as delighting all the gods, and thus getting his name. Accounts of Pan's genealogy are so varied that it must lie buried deep in mythic time. Like other nature spirits, Pan appears to be older than the Olympians, if it is true that he gave Artemis her hunting dogs and taught the secret of prophecy to Apollo.

Pan was originally an Arcadian god, and Arcadia was always the principal seat of his worship. Arcadia was a district of primitive mountain folk, whom other Greeks disdained, as the Olympians patronized Pan. Arcadian hunters used to scourge the statue of the god if they had been disappointed in the chase (Theocritus. vii. 107)

One of the famous legends of Pan involves the origin of his trademark pan pipes. Syrinx was a beautiful nymph beloved by the satyrs and other wood dwellers. She scorned them all. As she was returning from the hunt one day, Pan met her. She ran away and didn't stop to hear his compliments, and he pursued until she came to the bank of a river where he overtook her. She had only time to call on the water nymphs for help. Just as Pan laid hands on her, she was turned into the river reeds. When the air blew through the reeds, it produced a plaintive melody. The god took some of the reeds to make an instrument which he called a syrinx, in honor of the nymph.

Echo was a nymph who was a great singer and dancer and scorned the love of any man. This angered Pan, a lecherous god, and he instructed his followers to kill her. Echo was torn to pieces and spread all over earth. The goddess of the earth, Gaia, received the pieces of Echo, whose voice remains repeating the last words of others. In some versions, Echo and Pan first had one child: Iambe.

Pan also loved a nymph named Pitys, who was turned into a pine tree to escape him.

Pan is famous for his sexual prowess, and is often depicted with an erect priapus. He was believed by the Greeks to have plied his charms primarily on maidens and shepherds. Though he failed with Syrinx and Pithys, Pan didn't fail with the Maenads— he had every one of them, in one orgiastic riot or another. To effect this, Pan was sometimes multiplied into a whole tribe of Panes.

Once Pan had the audacity to compare his music with that of Apollo, and to challenge Apollo, the god of the lyre, to a trial of skill. Tmolus, the mountain-god, was chosen to umpire. Pan blew on his pipes, and with his rustic melody gave great satisfaction to himself and his faithful follower, Midas, who happened to be present. Then Apollo struck the strings of his lyre. Tmolus at once awarded the victory to Apollo, and all but Midas agreed with the judgment. He dissented, and questioned the justice of the award. Apollo would not suffer such a depraved pair of ears any longer, and caused them to become the ears of a donkey.

King Midas was mortified at this mishap. But he attempted to hide his misfortune with an ample turban or headdress. But his hairdresser of course knew the secret. He was told not to mention it. He could not keep the secret; so he went out into the meadow, dug a hole in the ground, whispered the story into it, and covered the hole up. A thick bed of reeds sprang up in the meadow, and began whispering the story and saying "King Midas has an ass' ears."

It is likely that the demonized images of the incubus and even the horns and cloven hooves of Satan, as depicted in much Christian literature and art, were taken from the images of the highly sexual Pan.

If one believes Greek historian Plutarch (in "The Obsolescence of Oracles" (Moralia, Book 5:17) Pan is the only Greek god who is dead. During the reign of Tiberius (A.D. 14-37), the news of Pan's death came to one Thamus, a sailor on his way to Italy by way of the island of Paxi. A divine voice hailed him across the salt water, "Thamus, are you there? When you reach Palodes, take care to proclaim that the great god Pan is dead." Which Thamus did, and the news was greeted from shore with groans and laments.

Despite the declaration of his death, however, Pan is widely worshiped by Neopagans and Wiccans today, where he is considered a powerful God and an archetype of male virility and sexuality.