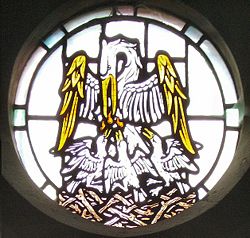 The pelican is a large water bird with a distinctive beak that acts as a pouch. Adult pelicans feed their young by dipping their beaks into a natural pouch to retrieve food. This led to the misperception that they feed their young by ripping open their own breasts so that they might offer their blood as food. In this way the pelican came to symbolize many things—namely the concept of self sacrifice.

More specifically, the pelican was a symbol for the sacrificial death of Jesus Christ. In alchemy, it is symbolic of the Philosopher's Stone as it is dissolved in molten lead which results in the transformation into gold. Thus, the pelican represents the concept of selfless striving for self-purification.

Another version of the pelican story said that it would, in a fury, kill its own young. Then, in a fit of remorse, it would stab its breast, causing blood to spill upon the dead chicks, miraculously bringing them back to life.

In the system of Freemasonry, one who has reached the 18th degree is referred to as a "Knight of the Rosae Crucis" as well as a "Knight of the Pelican." In Morals and Dogma Pike writes, "The Pelican feeding her young is an emblem of the large and bountiful beneficence of Nature, of the Redeemer of fallen man, and of that humanity and charity that ought to distinguish a Knight of this Degree. [...] The Eagle is to us the symbol of Liberty, the Compasses of Equality, the Pelican of Humanity, and our order of Fraternity." In Ordo Templi Orientis, the Fifth Degree confers the title "Sovereign Prince Rose-Croix, and Knight of the Pelican and Eagle."

Crowley on the pelican

Thou art like an osprey among the rice, I am the great red pelican in the sunset waters.
I am like a black eunuch; and Thou art the scimitar. I smite off the head of the light one, the breaker of bread and salt.
Yea! I smite - and the blood makes as it were a sunset on the lapis lazuli of the King's Bedchamber.
I smite! The whole world is broken up into a mighty wind, and a voice cries aloud in a tongue that men cannot speak.
I know that awful sound of primal joy; let us follow on the wings of the gale even unto the holy house of Hathor; let us offer the five jewels of the cow upon her altar!
Again the inhuman voice!
I rear my Titan bulk into the teeth of the gale, and I smite and prevail, and swing me out over the sea.
There is a strange pale God, a god of pain and deadly wickedness.
My own soul bites into itself, like a scorpion ringed with fire.
That pallid God with face averted, that God of subtlety and laughter, that young Doric God, him will I serve.
For the end thereof is torment unspeakable.
Better the loneliness of the great grey sea!

In The Heart of the Master, the pelican is attributed to the formula IAO:

I A O : all that liveth is blood of the Heart of the Master: all stars are at Feast on that Pasture, abiding in Light.