The phallus most often refers to the physical male genitalia, although in some cases it can refer to the clitoris, or the labia majora and labia minora of a female during fetal development, or to the male and female genitalia conjoined, or to the organ before sexual differentiation is evident. In its symbolic sense, it is an expression of the active generative power which is inherent in both men and women. It is often represented as an erect penis, although other possible symbols are the cross, the winged globe, the Sun, and the wand.

Arguably, the most basic Thelemic attribution of the phallus is Will. Aleister Crowley stated it most clearly in "The Gun-Barrel" in The Book of Lies: 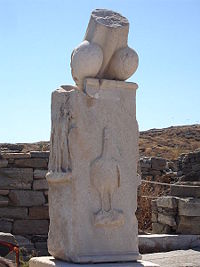 Column with phallus in Delos Island.

Mighty and erect is this Will of mine, this Pyramid
of fire whose summit is lost in Heaven. Upon it
have I burned the corpse of my desires.
Mighty and erect is this Phallus of my Will. The
seed thereof is That which I have borne within me
from Eternity; and it is lost within the Body of
Our Lady of the Stars.
I am not I; I am but an hollow tube to bring down
Fire from Heaven.
Mighty and marvellous is this Weakness, this
Heaven which draweth me into Her Womb, this
Dome which hideth, which absorbeth, Me.
This is The Night wherein I am lost, the Love
through which I am no longer I.

Crowley also identified the phallus with the dying god, such as Osiris, Dionysus, or Jesus. This is based on the nature of the physical male penis, which becomes flaccid (or "dies") after it has reached ejaculation. On the symbolic level, this can be interpreted as a god giving life followed by his own death. As Crowley wrote in The Vision and the Voice, "[The Pyramid] is also the phallus, which dies itself to communicate life to others."

He states this poetically in "The Sabbath of the Goat," the first chapter from The Book of Lies:

O! the heart of N.O.X. the Night of Pan.
PAN: Duality: Energy: Death.
Death: Begetting: the supporters of O!
To beget is to die; to die is to beget.
Cast the Seed into the Field of Night.
Life and Death are two names of A.
Kill thyself.
Neither of these alone is enough.

The shape of the figure I suggests the Phallus; this chapter is therefore called the Sabbath of the Goat, the Witches' Sabbath, in which the Phallus is adored.

As an example of anthropological study discussing the phallus or lingam in terms of a symbol containing both organs, here is a quote from Payne-Knight's A Discourse on the Worship of Priapus:

The first and greatest of these [attributes of the primordial deity], the creative or generative attribute, seems to have been originally represented by the union of the male and female organs of generation, which, under the title of the Lingam, still occupies the central and most interior recesses of [the Hindus'] temples or pagodas; and is also worn, attached to bracelets, round their necks and arms. In a little portable temple brought from the Rohilla country during the late war, and now in the British Museum, this composition appears mounted on a pedestal, in the midst of a square area, sunk in a block of white alabaster. Round the pedestal is a serpent, the emblem of life, with his head rested upon his tail, to denote eternity, or the constant return of time upon itself, whilst it flows through perpetual duration, in regular revolutions and stated periods. From under the body of the serpent springs the lotus or water lily, the Nelumbo of Linnæus, which overspreads the whole of the area not occupied by the figures at the corners. ... We accordingly find [the lotus] employed in every part of the northern hemisphere, where the symbolical religion, improperly called idolatry, does or ever did prevail. The sacred images of the Tartars, Japonese [sic], and Indians, are almost all placed upon it ... The upper part of the base of the Lingam also consists of this flower, blended and composed with the female organ of generation which it supports: and the ancient author of the Bagvat Geeta speaks of the creator Brahma as sitting upon his lotus throne. The figures of Isis, upon the Isiac Table, hold the stem of this plant, surmounted by the seed-vessel in one hand, and the cross, representing the male organs of generation, in the other; thus signifying the universal power, both active and passive, attributed to that goddess. On the same Isiac Table is also the representation of an Egyptian temple, the columns of which are exactly like the plant which Isis holds in her hand ...

Some instances when Crowley used the word: