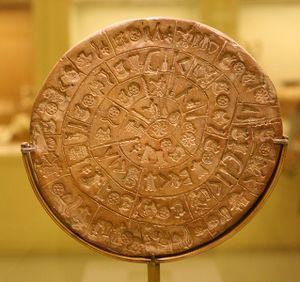 Spoken [[Language|language, for example, consists of distinct auditory tokens for representing symbolic concepts (words),]] arranged in an order which further suggests their meaning.

More often, a symbol is a conventional written or printed sign (specifically, a glyph), usually standing for anything other than a sound (symbols for sounds are usually called graphemes, letters, logograms, diacritics, etc.). Thus mathematical symbols such as π and + represent quantities and operations, currency symbols represent monetary units, chemical symbols represent elements, and so forth. (more...)