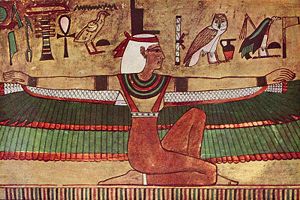 Isis (Ancient Greek: Ἶσις) was a goddess in Ancient Egyptian religious beliefs, whose worship spread throughout the Greco-Roman world. She was worshiped as the ideal mother and wife as well as the matron of nature and magic. She was the friend of slaves, sinners, artisans, the downtrodden, as well as listening to the prayers of the wealthy, maidens, aristocrats and rulers. Isis is the Goddess of motherhood, magic and fertility.

The goddess Isis (the mother of Horus) was the first daughter of Geb, god of the Earth, and Nut, the goddess of the Overarching Sky, and was born on the fourth intercalary day. At some time Isis and Hathor had the same headdress. In later myths about Isis, she had a brother, Osiris, who became her husband, and she then was said to have conceived Horus. Isis was instrumental in the resurrection of Osiris when he was murdered by Set. Her magical skills restored his body to life after she gathered the body parts that had been strewn about the earth by Set. This myth became very important in later Egyptian religious beliefs.