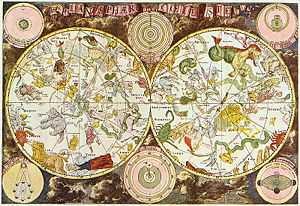 "I dined at Cosegrave's house one night. He had asked Evangeline Adams to meet me as being a famous astrologer. The meeting led to a lengthy association. She wanted me to write a book on astrology for her. The plan failed through her persistent efforts to cheat me out of the profits, and her obstinate ignorance of the elementary facts of nature combined with an unconquerable antagonism to the principles of applying common sense to the science.

I learned a good deal, nevertheless. The work kept me concentrated on the subject. At this time, it was my invariable practice to judge from the personal appearance of every stranger I met the sign rising at his birth. Having made up my mind, I would ask him to tell me either the hour or the day of his birth. I could then calculate the missing day as thus: Suppose I judge my man to have Libra in the ascendant and he tells me his birthday is October 1st. When the sun is in 5° or 6° Libra, I can tell him he was born at sunrise, within a limit of error of about two hours. Alternatively, should he say, "I was born at midnight", I can give his birthday to within a fortnight or so of Christmas. I tabulated my results over a considerable period and found that I was right in a little over two cases in three. Where I was wrong, I found that either the sign I had chosen for his ascendant was that occupied by his sun, which in some people determines the personal appearance more effectively than the ascendant, or else, in erecting his horoscope I found the rising sign occupied by planets whose nature modified the sign so that it could be mistaken for the one I had picked out."

("The Confessions of Aleister Crowley", Chapter 77)