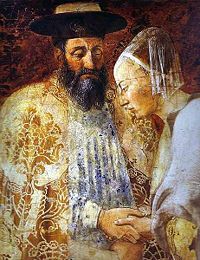 Solomon or Shlomo Hebrew: שְׁלֹמֹה; Standard Hebrew: Šəlomo; Tiberian Hebrew: Šəlōmōh, meaning "peace"; Arabic: سليمان Sulayman) in the Tanakh (Old Testament), also called Jedidiah, was the third and last King of united Israel (including Judah), builder of the Temple in Jerusalem, renowned for his great wisdom and wealth and power, but also blamed for his later pacifism toward his converted wives in their worship of other gods. He is the subject of many later legends. He is also in a line of the biggest Kabbalah masters.

The name Solomon The name Solomon (Shlomo) means "peaceful," from the Hebrew Shelomoh (Arabic Sulayman). The name given by God to Solomon in the Bible is Jedidiah, meaning "loved by God", (2 Samuel 12:25), and some scholars have conjectured that Solomon is a "king name" taken either when he assumed the throne or upon his death.

Solomon's case is one of the few in the Bible where the name given by God does not stay with the character. Solomon's birth is considered a grace from God, after the death of the previous child between David and Bathsheba. (more...)