Solar Lodge was an esoteric order that was launched in 1962, formally named in 1965, and ceased spiritual activities in 1972. The Lodge was set in motion by Ray Burlingame (Frater Aquarius), a member of the Astrum Argenteum and a IX° initiate of the OTO, when he initiated Georgina "Jean" Brayton (Soror Capricornus) in 1962. In 1965, Aquarius instructed Capricornus to initiate other people and then he died. Capricornus proceeded to initiate new members and expanded Solar Lodge in the middle-to-late 1960s to include over 75 members. The Lodge essentially ceased to be viable in 1972 when it turned from spiritual endeavors to materialistic goals. Solar Lodge utilized the initiation rites of the OTO, but its practical curriculum was that of the Astrum Argenteum. It is not considered to have been a "legal" or "regular" branch of the OTO by the modern Ordo Templi Orientis lineage that has descended from the legally-recognized "caliphate."

The Founding of Solar Lodge

Ray Burlingame (Frater Aquarius) was a IX° initiate of the Ordo Templi Orientis (OTO) and a member of the Astrum Argenteum. Georgina "Jean" Brayton (Soror Capricornus) was born in England. After world war II, she moved to the USA where she married Richard Brayton (Frater Sol).

Capricornus met Aquarius in 1960 and they endlessly discussed metaphysics and initiation. Capricornus asked Aquarius to initiate her, but he refused, stating that the OTO had been closed in the early 1950s by its current chief, Karl Germer (Frater Saturnus).

But on a Thursday evening in 1962, Aquarius relented and said to Capricornus, "It's time for you to be initiated! Come here next Tuesday at eight in the evening! " On the following Tuesday, Capricornus received the Minerval and the I°. Of great interest is the fact that on that exact same Thursday when Aquarius finally announced that he would perform the initiation, Saturnus passed away. But Aquarius and everyone else who was concerned, did not learn of Saturnus’ death until long after the ceremony.

So the initiatory link had been passed to Aquarius in the spirit, so to speak, but there was no written Charter. At the time, there was no one around who was known to be claiming responsibility for the Order's activities. That changed after 1970, but it had no effect on what happened in the preceding decade.

The initiatory activities of Aquarius have been discussed extensively by various parties, none of whom were there at the time. The current, legally-recognized OTO holds the viewpoint that Solar Lodge was not really a branch of OTO.

However, back in the early 'sixties, Aquarius simply proceeded to rapidly move Capricornus through the (three) major stages of initiation (I°, V°, IX°) in an attempt to transfer all of the "secrets" before time ran out.

In July of 1965, Aquarius told Capricornus to initiate Frater Shiva and he handed over all of the OTO papers along with a certain magickal talisman. A few days later Aquarius departed from the physical plane. 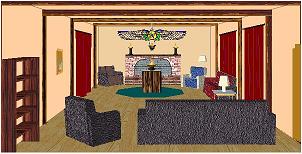 In 1965, the name "Solar Lodge" was officially adopted and the original Solar temple was established in the living room of a sixty-year-old small mansion at 1241 West 30th Street in Los Angeles, California. The temple featured heavy, wood beams across the ceiling and the original maroon velvet drapes that were included when the building was purchased by Jean Brayton. 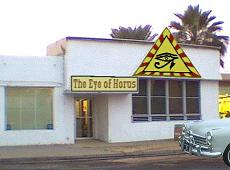 The Order then opened a metaphysical bookstore, The Eye of Horus, that was first located across the street from the U.S.C. campus on Jefferson Blvd. Then it moved to 8th Street in Los Angeles and eventually was transported to the old post office building on 3rd Street in Blythe, California.

The "Eye in the Triangle" was prominently posted on the front of the store - which was not a very smart thing to do here in the heart of this Illuminati-hating town:

By 1967, the Order owned six properties in Los Angeles, four of which were small mansions. One of them, at 2627 Menlo Avenue, hosted the huge Grand Solar Lodge temple:

In 1967, Solar Lodge began to move its geographical focus from Los Angeles to a remote desert location near Vidal, California. Extensive construction efforts resulted in the establishment of "Solar Ranch" : 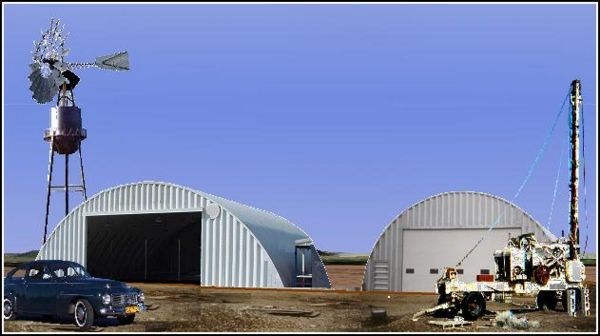 In early 1969, the Lodge purchased and began operating all of the commercial facilities in the nearby, almost a "ghost town," of Vidal, California. This included a single complex that incorporated a gas station, a cafe, a bar, a dance-floor, a house, a motel, a recently abandoned post office and a small grocery store.

In May of 1969, a massive firestorm destroyed all of the Solar Ranch buildings. In July, a police raid saw thirteen of the Order's members arrested and warrants were issued for others. The reason for the arrests was the alleged mistreatment of a child, but it became obvious that this was merely a pretext to discredit the group, which had attracted the ire of local conservatives.

In response to a recommendation from the Public Defender, the leadership of the Order hastily escaped to "The Ace in the Hole," a property owned by Frater Shiva in Arizona. But one of those arrested, Frater Ra, turned traitor ("State's Witness") and informed the police of this escape. Soon the FBI was after the heads of the group for "interstate flight to avoid prosecution."

South of the Border

Several senior members of the Lodge, including Capricornus, Sol, Shiva, and Kuat, eventually fled to Mexico where they magickally discovered and operated a 70-hectare (28-acre) Pig Farm.

During a ceremony to "discover direction," on Robert Louis Stevenson's original Treasure Island (offshore from Ensenada, Baja California), a huge "X" with a south-oriented arrow materialized in the sky:

A journey south a few days later brought the group to a rancho that was for sale ... with a massive "X" inscribed on a hill with the attendant "arrow" pointing right at this unique property:

When the FBI found out that the Lodge had gone South of the Border, they incited the Mexican Federales to capture the fugitives by mentioning the sacrifice of babies. But, the Lodge was one step ahead of the law; for the group was alerted a few hours before a "search and arrest" raid, and simply shifted its focus North of the Border to Vancouver, British Columbia in Canada.

There were never any sacrifices as reported in the book, The Family, written by Ed Sanders. Solar Lodge members fully understood the expected "sacrifice" was that of the ego. Neither Manson, Tex Watson, nor any of their associates ever visited any facility of Solar Lodge.

Capricornus and Sol published a newspaper, The Midnight Press, that revealed illegal and improper conduct by Riverside County authorities.

Capricornus avoided going to court to settle the matter, even though her attorney recommended such action. She had the members capture the attorney, and they forcibly put him through the Minerval degree ceremony (as if this would transform him). This was not a good idea. The lawyer just stopped all the stupidity by telling the F.B.I. where to find her. Soon Capricornus and Sol were arrested by the F.B.I. at a furniture store.

The Judgement Hall of Osiris

However, the charges against Solar Lodge members were now an old case. The original, corrupt authorities had been purged due to the results of The Midnight Press, and nobody did any jail time.

Capricornus was found guilty of "child abuse" and received three years of probation along with a $500 fine. Similar fates awaited any other "wanted" members who subsequently surrendered.

Frater Shiva appeared in court in 1972, and all charges against him were dismissed. He then tendered his formal resignation and moved away.

By late 1972, Solar Lodge essentially ceased activities of a spiritual nature and turned its attention to money and long hours of business-related hard work. Capricornus became a hard-nosed dictator, the esoteric books were all locked up in a closet, reading was forbidden, and initiation ceremonies ceased. From this point on, the Order became humorously known as "The Tong." The Tong later moved to Las Vegas where they prospered greatly in the food catering business. The properties in Los Angeles, all together, sold for exactly one million dollars.

Information about Solar Lodge is available from many sources, but most of them contain seriously inaccurate or false "facts." There are a few sources of accurate information:

(1) Jerry Cornelius published a fine account of Solar Lodge events from the viewpoint of Grady McMurtry and the original "Caliphate" OTO in Red Flame, and an article, Myths of the Solar Lodge Revisited, is available for reading at [1].

(2) Martin P. Starr gave a realistic lecture on Solar lodge in Tokyo in 2005 and that lecture was transcribed into an article in the May 2006 issue of The Pomegranate: The International Journal of Pagan Studies, with an informative link about this article at [2].

(3) This Encyclopedia article has drawn on information from [3], which is an abridged form of Frater Shiva's book, Inside Solar Lodge - Outside the Law, his personal account of the full, unvarnished history of the group that offers a rare glimpse into the lives, aspirations and magickal practices of this remarkable and much-misrepresented group of twentieth century magicians.

Shiva, Frater. Inside Solar Lodge - Behind the Veil: True Tales of Initiation and High Adventure. The Teitan Press: York Beach, ME. ©2007 - Out of Print