Vision and the Voice

"The Vision and the Voice" is an account of Aleister Crowley's travels through the thirty Enochian Aethyrs. It is considered a publication in class A and B. The work depicts with strikingly detailed descriptions the visions encountered and the messages received as Crowley worked his way through the complex Enochian system.

The first two Aethyrs or Aires were received by Perdurabo on November 14th and 17th, 1900 in Mexico. He found himself at this time unable to pass beyond the 29th Aire and abandoned the work. Crowley would later discover that the reason he was unable to advance was because he had not attained the grade of Magister Templi 8°=3°.

Crowley would not resume the work until 1909 when he traveled through the Sahara with his student Victor Neuburg, who acted as his scribe. The two walked through the desert invoking one Aethyr each day. Below are brief descriptions of each Aire taken from "The Vision and the Voice" 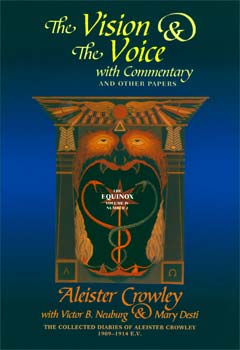 (Cover of the book "The Vision and the Voice" by Aleister Crowley. Copyright held by Ordo Templi Orientis.)

A BRIEF SYNOPSIS OF THE CONTENTS OF THE CALLS OF THE

27. "The Vision of the Initiation of Hekate (Atu XIV)The Redemption of the Woman of Witchcraft by Love."

24. "The Rose. (The Woman of Atu XIV. Minister of Babalon; The Water-Kerub in the Initiation.) The First Kiss Of the Lady of Initiation."

22. "The 49-fold Table (First appearance of the Crowned and Conquering Child to the Exempt Adept as in the Pastos) The Vision of the Rose, the Heart of BABALON and of The Birth of the Universe."

21. "Kether. (The Hierophant prepares the Candidate). The Vision of the Ineluctable Destiny."

20. "The Path of Kaph (Atu X). The Hiereus prepares the Candidate). The Vision of the Wheel of Fortune. The Three Energies of the Universe."

19. "The Path of Gimel (The Hegemone between the Pillars. Preliminary: The Vision of the Unguided Universe.)"

18. "Tiphereth. (The King's Chamber. The Vision of the Holy Guardian Angel.) The Instruction concerning the Obtaining of the Vision and the Voice of the Thirty Aethyrs. The Preparation of the Candidate." Aethyr

17. "The Path of Lamed. (The combination Gimel, Lamed, Samech. The Vision of the Justice or Balance of the Universe."

14. "The Vision of the City of the Pyramids. The Reception Of the Master of the Temple."

13. "The Garden of Nemo. The Work of the Magister Templi."

12. "The Path of Cheth. The Bearer of the Sangraal. The Black Brothers."

9. "Malkuth. (The Pure Virgin.) The reward of the Magister Templi."

8. "The Holy Guardian Angel. His instruction."

7. "The Path of Daleth. The Black Brothers."

5. "The Vision of the Middle Pillar. (Arrow). The Mystery Of Atheism."

4. "The Marriage of Yod and He. (The common Tibetan Symbol.) The Seer identifies himself with it."

1. "The Vision of The Crowned and Conquering Child, the Lord Of the Aeon."

The Vision and the Voice