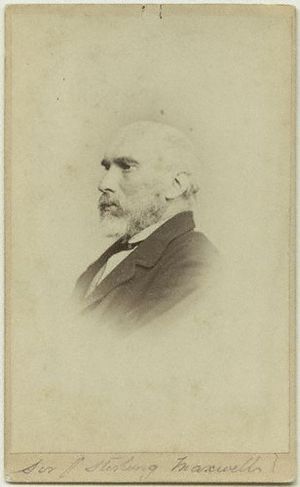 He was the author of the book “The Canon - An Exposition of the Pagan Mystery Perpetuated in the Cabala as the Rule of all the Arts”, which had been printed anonymously in 1897 (modern edition, The Garnstone Press, London, 1974).

He was born at Kenmure, the son of Archibald Stilling, Esq., of Keir, and Elizabeth Maxwell, sister of Sir John Maxwell, 8th Baronet and Harriet Maxwell (d. 1812) and daughter of Sir John Maxwell, 7th Baronet and Hannah or Anne Gardiner, daughter of Richard Gardiner, of Aldborough, Suffolk, and studied at Trinity College, Cambridge, graduating a BA degree in 1839 and a MA degree in 1843. He travelled in Spain and the Levant and contributed to Fraser's Magazine and the Examiner. In 1848 he published his pioneering Annals of the Artists of Spain. He succeeded to the Keir estates in 1847.

He succeeded to the Maxwell Baronetcy (in the Baronetage of Nova Scotia) in 1865, assuming the additional name of Maxwell.

He was a breeder of shorthorn s and Clydesdale horses, an ardent bibliographer and collector of works of art.