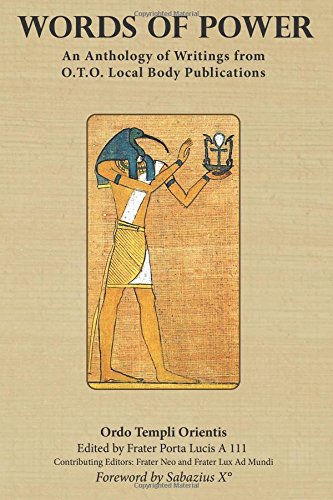 Words of Power: An Anthology of Writings from O.T.O. Local Body Publications is a selection of articles culled from the magazines produced by local bodies of the Ordo Templi Orientis, U.S.A.

The articles cover a number of diverse topics including self-publishing in a magical community; personal stories of life within the O.T.O. and the growth of various local bodies; the religious philosophy of Thelema; the life and death of Jack Parsons, rocket scientist and Thelemic pioneer; reviews of mystical cinema classics; interviews with filmmaker Kenneth Anger and magical musician Larry Kirwan; a pilgrimage to Aleister Crowley’s notorious Thelemic Monastery in Sicily; reflections on the mysticism of Richard Wagner, William Shakespeare and Carl Jung; magical musings; occult history; reflections on ritual; practical magick and personal journeys in the world of modern occultism.

Ordo Templi Orientis is an international fraternal order of men and women devoted to the pursuit of individual liberty, the study of magick, and the promulgation of the Law of Thelema.

Founded in the late nineteenth century, the O.T.O. has been shaped by such leading lights as Carl Kellner, Theodor Reuss, Aleister Crowley, Karl Germer and Grady Louis McMurtry.